To commemorate this year’s International Workers’ Memorial Day, BWI-affiliated trade unions once again raised their voices to persuade the International Labour Organisation (ILO) to recognise health and safety as a fundamental right.

Some of the highlights of BWI affiliates’ various IWMD actions worldwide were:

The big presence of BWI affiliates on conventional and social media is also worth mentioning. Such presence ensured BWI’s messages were conveyed far and wide and further stressed the importance of this year’s International Labour Conference (ILC) to declare OSH as a fundamental right.

To cap the campaign, BWI recognised the achievement of its affiliates in gathering signed joint OHS declarations with different construction, building materials and wood companies and employers’ associations. In total, over 450 OHS declarations have now been signed covering over 483,000 employers, and 18 million workers.

Fiji’s Ministry of Employment in collaboration with the Ministry of Health and Medical Services has implemented a five-year Occupational Health Service Strategic Plan.

“My Ministry in collaboration with the tripartite National OHS Advisory Board has already endorsed the process to ratify ILO Convention 161 on Occupational Health Services, ILO Convention 187 on the Promotional Framework for Occupational Safety and Health, and ILO Convention 162 on the elimination of asbestos,” said Parveen Kumar Bala, the Minister for Employment, Productivity and Industrial Relations. 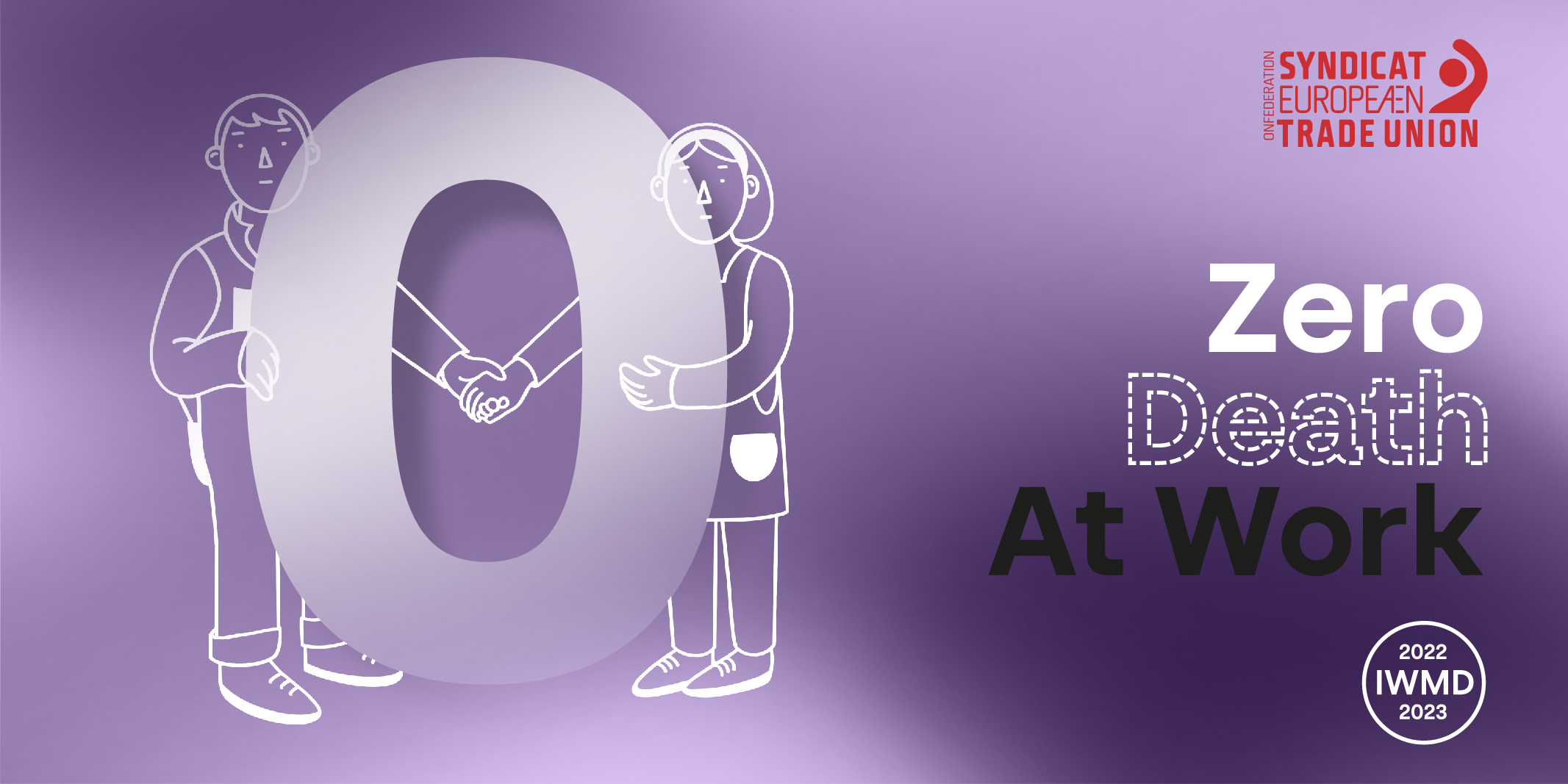 Almost 30,000 people may lose their lives at work in the EU over this decade without action to make workplaces safer, trade unions are warning on International Workers’ Memorial Day.

The number of fatal workplace accidents fell slowly over of the last decade, although progress was far from steady with deaths rising again in 2019, according to Eurostat data.

Another 27,041 workplace deaths should be expected between 2020 and 2029 if change continues at the same pace as during the last decade, an analysis by the European Trade Union Institute has found (see Notes below).

Workplace deaths are not expected to fall at all in Spain, are set to get even worse in France and wouldn’t end in Europe for more than 30 years.  They could though be ended by 2030 if the political will existed.

Number of workplace deaths expected this decade and year in which fatal workplace accidents will be eliminated in selected member states if 2010-2019 trends continue:

The findings come as the European Trade Union Confederation launches a manifesto for zero death at work which calls on European leaders to “walk the walk” as well as “talk the talk” on saving the lives of working people.

The manifesto – which has been signed by Ministers, MEPs, trade union leaders and top occupational health and safety experts – called for an increase in workplace health and safety training, inspections and penalties to end workplace fatalities by 2030.

Half a million fewer workplace safety inspections are taking place across Europe now than at the start of the last decade, the ETUC’s analysis of International Labour Organisation data has found.

As well as workplace accidents, the ETUC are also calling on EU leaders to do more to end the scandal of cancer, which still takes the lives of over 100,000 people every year, as well as protecting workers from increasing extreme weather events caused by climate change.

“Nobody should leave home worried about whether or not they will make it back to see their family after work. But that’s the daily reality for many workers, often because of irresponsible employers cutting corners to increase profits and politicians who attack common sense safety rules and inspections for ideological reasons.

“Thousands of people are still losing their lives every year in brutal – and avoidable – accidents on construction sites, in factories and at other workplaces. Millions of people have also died after being exposed daily to cancer-causing substances at work.

“While workplace deaths might seem like something from another century, these tragedies are set to keep happening in Europe for at least another 30 years. That isn’t inevitable though.

“On International Workers’ Memorial Day, we remember the dead and vow to fight for the living. If politicians are willing to act, we could achieve zero deaths at work by 2030. It’s high time the lives of working people were made a priority.” Panama: SUNTRACS completed its 1-month campaign on Health and Safety at Work (SST), on April 28, 2022. After a month of meetings with workers and inspections to construction projects, the union organized a Closing Act in the Ramal Station Project, Metro del Tocumen Airport.

Peru: SUTFACAP joins the meetings of April 28, 2022 at the Plantation of Faber-Castell Peru. The union is calling for occupational health and safety to be recognised as an ILO fundamental right at work.

El Salvador: SOICSCES event on April 28, 2022. The union has agreed occupational health and safety must be recognised as an ILO Fundamental Right at Work. #IWMD22